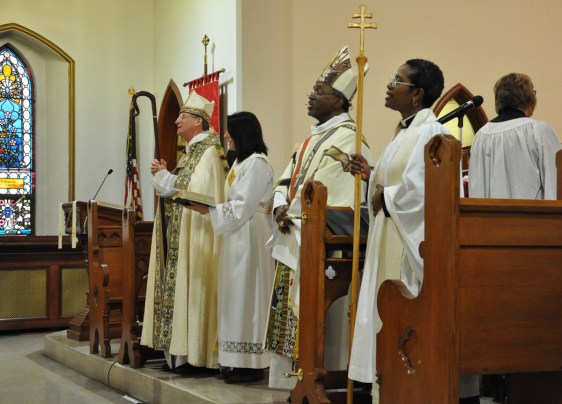 All baptized Christians are welcome to join us for the Holy Eucharist (Communion). Those who have not been baptized should not receive Communion, but are invited to participate in all other portions of our Sunday worship!

Who are Anglicans? Who are Episcopalians?

Anglicans — also known in some places as Episcopalians — are Christians who practice their faith in the context of the 38 autonomous member churches, or provinces, of the Anglican Communion, which spans 164 countries worldwide with 77 million members. One of these provinces is the Episcopal Church in the United States of America, with 2.4 million members in 112 dioceses, or geographic regions. Anglicans and Episcopalians are persons of many ethnic and cultural heritages. Anglicans are known for welcoming diversity of opinion and inquiry.

Clergy within the Episcopal Church and the wider Anglican Communion are men and women who are ordained as bishops (after being elected in local dioceses), priests and deacons. Clergy often have spouses while others are single.

Many church members, or laity, hold various leadership positions that range from election to local parish vestries (or boards of directors) or as deputies to General Convention, the Episcopal Church’s bicameral legislative structure.

What is the Church of England, and how does it relate to the Episcopal Church?

Before the sixteenth-century Reformation in western Europe, the Christian church in a given country or region was customarily described as the church of the region, such as the Gallican Church, the Spanish Church, the English Church (Latin ecclesia anglicana), or the Church of England.

The Episcopal Church derives much of its doctrine, discipline, and worship from the Church of England.

What is the Episcopal Church?

The Episcopal Church (TEC) is a province of the Anglican Communion.

A conference of three clergy and 24 lay delegates met at Chestertown, Kent County, Maryland, on November 9, 1780, and resolved that “the Church formerly known in the Province as the Church of England should now be called the Protestant Episcopal Church.” On August 13, 1783, the Maryland clergy met at Annapolis and adopted the name “Protestant Episcopal Church.” At the second session of the 1789 General Convention, September 29-October 16, 1789, a Constitution of nine articles was adopted. The new church was called the “Protestant Episcopal Church in the United States of America” (PECUSA). The word “Protestant” noted that this was a church in the reformation tradition, and the word “Episcopal” noted a characteristic of catholicity, the historic episcopate.

The 1967 General Convention voted to add a preamble to the Constitution, which states, “The Protestant Episcopal Church in the United States of America, otherwise known as The Episcopal Church (which name is hereby recognized as also designating the Church)….” The title page of the 1979 BCP states that the Book of Common Prayer is “According to the use of The Episcopal Church.”

"The friendly church in the heart of town"! • A member of the Episcopal Diocese of Pittsburgh and the worldwide Anglican Communion • Sunday worship at 8 and 10 a.m.