The first Episcopal service in McKeesport was held in the “little red school house” in 1869. This building, McKeesport’s first school, was located on Market Street, Downtown. (The building is now located in Renziehausen Park and is part of the McKeesport Heritage Center.)

Services also took place in the homes of church members, the Masonic Hall, and at the German Lutheran and Presbyterian churches. The Rev. Dr. Killikelly also conducted services in Dravosburg as well, and opened a Sunday school in Port Vue near the old Penny coal mine.

In the meantime, future members of what would become St. Stephen’s purchased two lots near the corner of Eighth Avenue and Market Street, Downtown, for $1,590 for future erection of a suitable sanctuary.

The name St. Stephen’s was adopted in 1871, when a mission church was created for 33 confirmed members of the Episcopal Church.

The cornerstone for the church building was laid in 1872 and the wooden-frame church was constructed at a cost of $2,800. The first services in the new building were held in 1873. 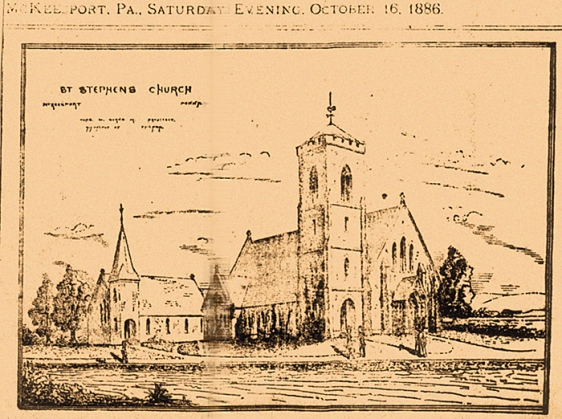 Conditions in the fast-growing town of McKeesport were still primitive, and there were no bridges connecting the then-borough of McKeesport with the neighboring communities across the rivers. On Sundays, the church’s deacon-in-charge used a log raft to help parishioners who lived on the opposite banks of the Monongahela and Youghiogheny rivers to get to services!

St. Stephen’s was incorporated as an independent parish on Nov. 3, 1885. At about the same time, the old frame church building was moved to the rear of the parish’s property for use as a “guild hall,” and the cornerstone for a new stone church was laid in May of 1886. The cost of the new church—the first stone building in McKeesport—was $15,000.

In 1948, the old wooden guild hall was demolished and replaced with a new Parish House, annexed to the church. In the mid-1980s, the old McKeesport Post Office was purchased and demolished and is now used as a parking lot.

"The friendly church in the heart of town"! • A member of the Episcopal Diocese of Pittsburgh and the worldwide Anglican Communion • Sunday worship at 8 and 10 a.m.